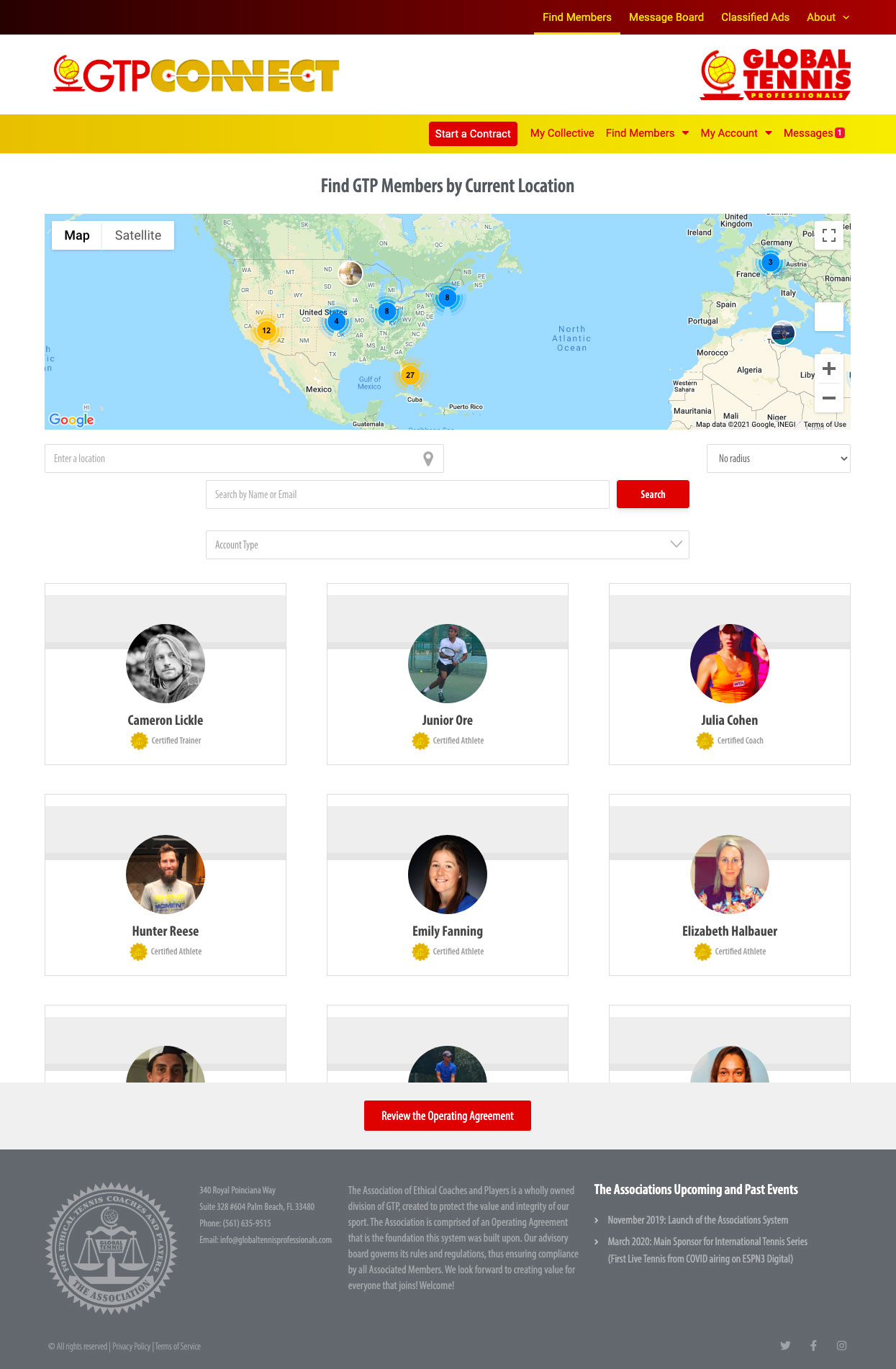 Included in every membership is access to proprietary software that makes GTP the center hub of your ever-evolving business. Connect with other members; post relevant information about upcoming events; place classified ads for job opportunities.
The current business model for professional tennis is economically and geographically limiting in numerous ways. As you have already learned, GTP supports fair treatment for every individual that makes their living through professional tennis. The following networking benefits are yet another innovative benefit that GTP has pioneered:

Find A Member, Anywhere in the World

Our platform allows members to connect with one another, from anywhere in the world. We encourage every member to update their location and profile information as often as possible. Current information allows athletes and guardians to find appropriate providers to hire, while providers can find new athletes to train. A search can be generated by name, member type or specific location. This one feature alone is priceless. Never before has the hiring process been easier or more adaptable to the real needs facing professional tennis today.

View Profiles Until You Find That IDEAL Match!

“Word of mouth” is how most athletes and guardians find a service provider, and vise versa. This often ends up perpetuating mediocrity. For instance, a convenient coach may be great because they aren’t far, but they may be far from great for that athlete’s specific needs. With GTP, an athlete or guardian can take your time reviewing profiles, then sample different coaches without worrying about the past required exclusivity.

Connect with the right people, and find business success with our exclusive, enforceable, on-the-fly contracts.

View Archived Records, So You REALLY Know Who Worked With Whom

Every athlete that has ever gained a world ranking, has been trained by various people. These providers should not only be compensated fairly, but they should also get credit for their contribution to this athlete’s career. Simply by saying, “I worked with so-and-so”, those that have worked for an hour with that athlete, are seen in the same light as those who have worked with them for years. During the hiring process, wouldn’t you want to know who worked with whom, and how extensively?

• GTP replaces hearsay with facts. When you review resumes, you’re seeing lists of who has actually worked with whom and for how long.

• Athletes can give providers appropriate credit for their contribution to the player’s growth, and the type of GTP contracts they have executed.

• Members can review past records and ask for references from other members.

• Providers! At last, you have historically documented records for the world to see. Share who you have worked with, developed and trained. 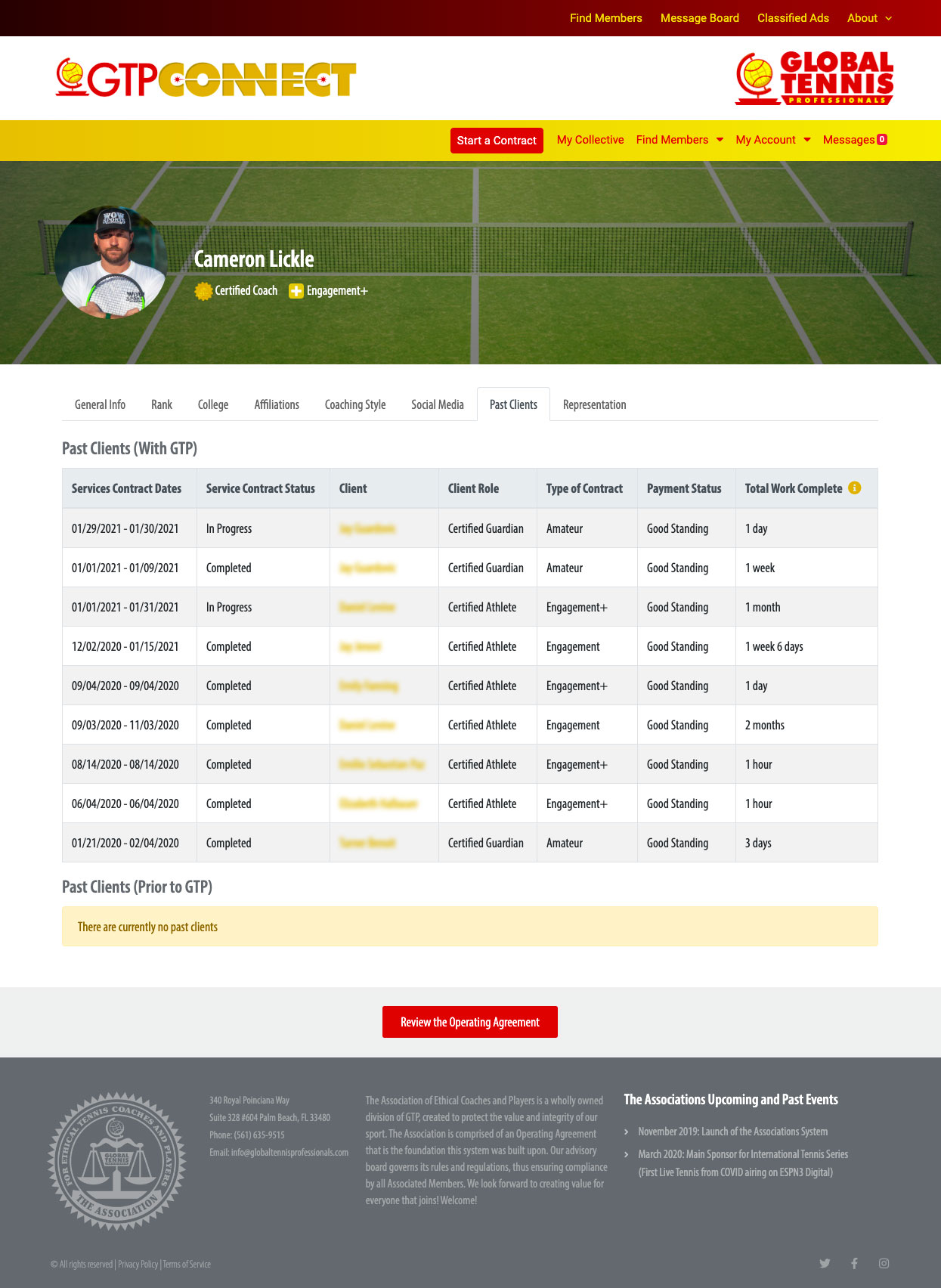 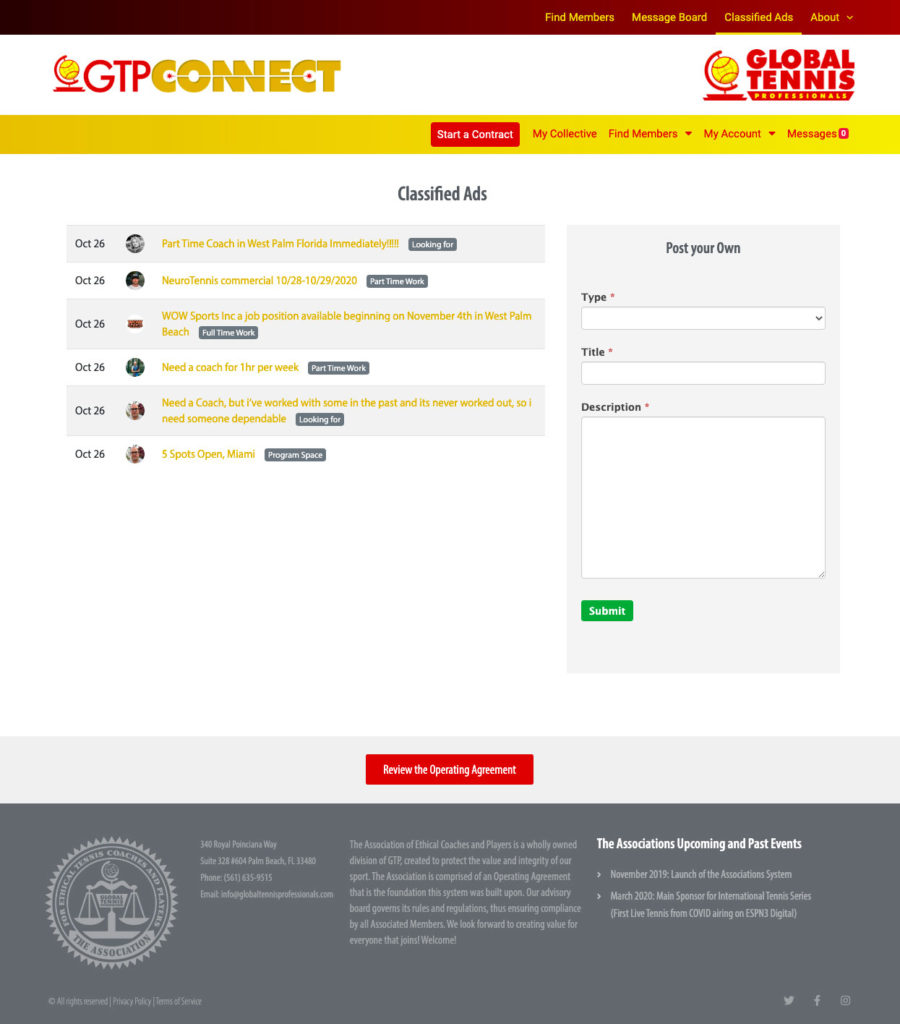 Athletes and guardians: Notify the global tennis community when the services of a provider are required, along with specific duration and location. This will put an end to unsolicited requests and unwanted advances.

Providers: Respond to an athlete or guardian’s classified ads, and post news of your upcoming availability and opportunities within your organization or for yourself.

There are 3 forum topics: 1 – Member updates of new features and improvements to GTP; 2 – Member suggestions, thoughts  on how we improve GTP services. Your continued feedback will ensure equality, fairness and accountability for everyone; and 3 – Water cooler, where members can debate or discuss hot topics, offer suggestions, exchange ideas or information about anything. 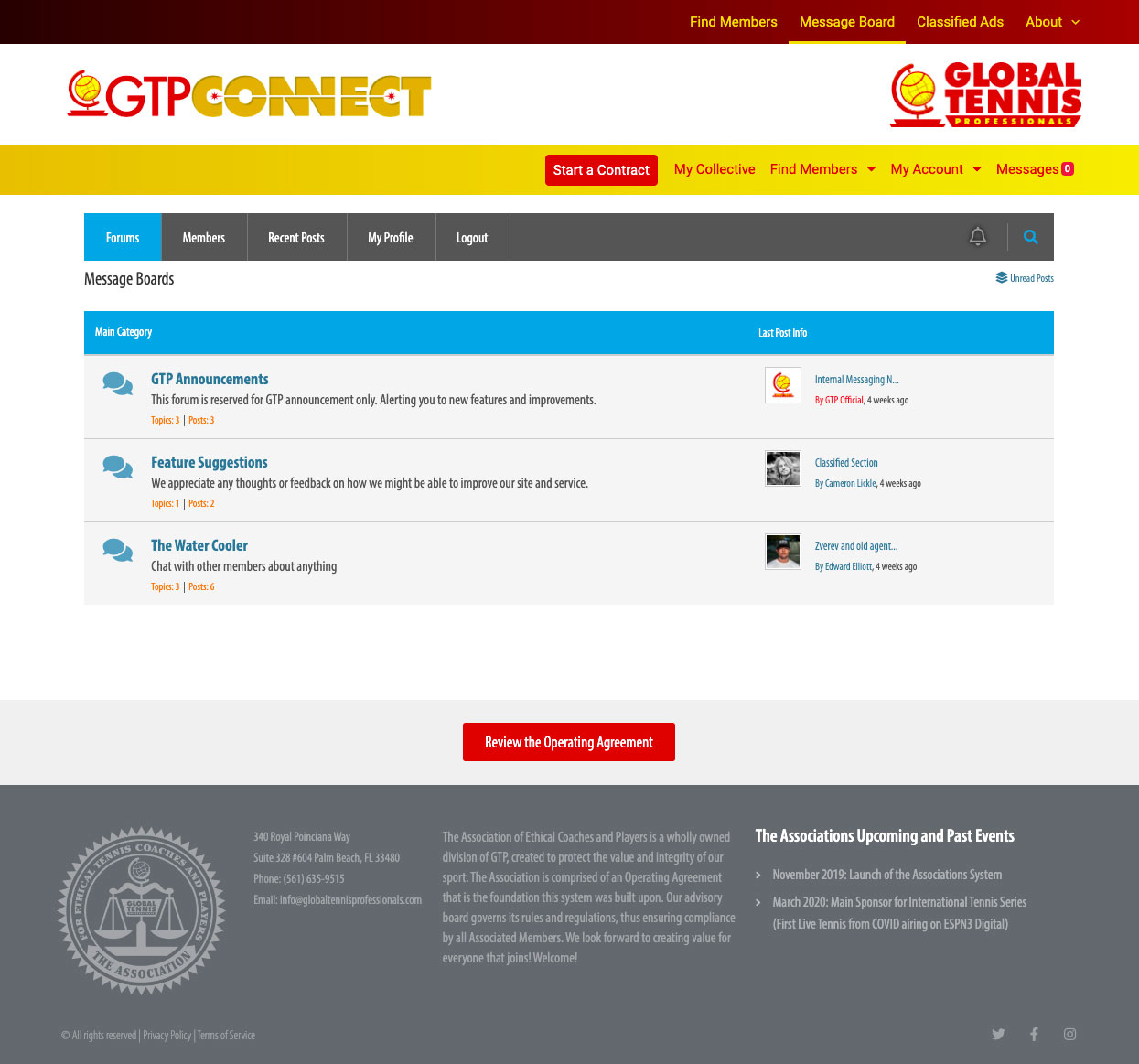 Members can leave messages or contact one another privately. This will speed the process of working together along, such as sharing  notifications about specific training requirements, recent updates or availability.

• We understand conflicts do arise occasionally, so when they do, GTP’s association serves as every member’s unbiased, third party mediator.

• If one member of a contract is not upholding their obligations, the other member can file a breach with GTP directly from your profile page. GTP will hold the defaulting party accountable.

• If this obligation has a monetary value, GTP will utilize a series of measures to ensure compensation is paid accordingly on behalf of the provider, at no additional out-of-pocket expense to the other member.

• If mediation is unattainable, any active contracts with other members will be immediately suspended until a resolution has been determined. 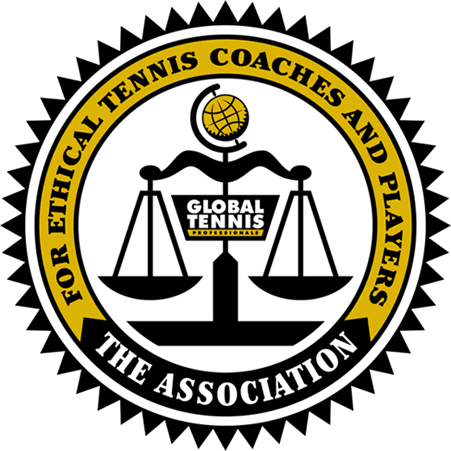 The Associations Upcoming and Past Events

Explore a Career with GTP 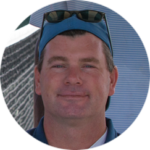 One of the best Junior Tennis Players the State of Florida has ever seen. Born Irish but American to the core, Adrian has devoted his life to the sport of tennis (last fifteen years as a coach) was a Former #1 Ohio State Player and has incredible insight as to why American tennis has struggled for the last twenty years. His wisdom and contributions continue to mold GTP into the world class organization that it is and is helping us create long term goals. 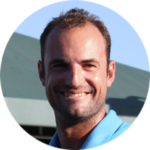 Vince is one of the most talented and skillful Coaches that the tennis world has to offer as his current position at the Everglades in Palm Beach, FL is evidence of that. Born in France, Vince is currently based in Jupiter FL and has helped craft the talents of several top 300 Players over the last twenty years including Former #135 Vincent Millot. Vince continues to be a major contributor to the creation of GTP and the Amateur Coach Guardian relationship. 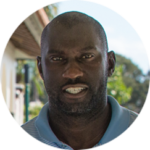 One of the top players ever produced from his native Country the Bahamas. BJ, currently serves as the tennis director at Bear Lakes Country Club in West Palm Beach, FL, and has experienced first hand the hardship of affording proper coaching and the struggle to provide premium coaching when players cannot afford it. Through his unique insight we have cultivated programs that allow Parents and Guardians the opportunity to receive coaching for their child or ward today through GTP. 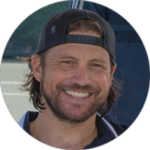 Cameron’s first hand experience as a Coach, Agent and Sponsor of a Chinese Player ended with a situation that rivaled Jules Verne’s, “Journey to the Center of the Earth”. His experience has served as the catalyst to fix a system that most knew was broken, but feared to take action. His insights, first hand experience and now firmly established blue print from “soup to nuts” has aided in the creation of standards, accountability and uniformity that is easy for everyone to understand and ensures a similar situation is never encountered again. 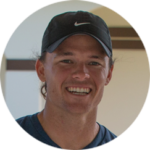 Coach to American Superstar Lauren Davis. Eddie is a massive contributor to the shape of what GTP is currently. Eddie’s insights have shed much light into the inconsistencies the Coaching World contains. Representation for the Coach is non-existent…until now. Eddies first hand experience is helping GTP shape the way Engagement + Contracts for Coaches and Players within the top 650 ATP/WTA are created.